“Made in the USA… it matters to me… Ask for the made in the USA label, because it matters to all of us.”  These were the core words from a 1986 Walmart commercial; in which the 30 second advertisement featured seven top entertainers (including Bob Hope, Don Johnson and the original Wonder Woman – Lynda Carter) saying ‘made in the USA matters.’  Walmart’s ‘Buy America’ campaign ran from 1985 to 1992, when NBC’s Dateline exposed that many of the proclaimed ‘Made in America’ products were imported from Bangladesh and often made by child laborers.  But good advertisements bring the faithful; Walmart learned that from Bonneville Communications (LDS-owned) years earlier from the Mormon’s award-winning advertisement Homefront series that began in the 1970s and reshaped the image of their Church industry.

This article will expose how Walmart enchanted politicians, banks and the business world all the way to join the top list of global elites.  This will be done in two parts, with this Part I looking at Background History and the Timeline; and Part II examining The Causalities and How Walmart was made.  Much of what is in this work will come from Walmart.com (Sam Walton, Timeline, etc.).   This article is part of the Exposing the Sorcerers series by TheTruthSource.org.

Walmart.com (2017) says, “Walmart as we know it today evolved from Sam Walton’s goals for great value and great customer service…  Sam… when his military service ended in 1945… moved (from Oklahoma) to Iowa… then to Arkansas.  …In 1950, the Walton’s (moved to) …Bentonville, where Sam opened Walton’s 5&10… Inspired by the early success of his dime store… Sam opened the first Walmart in 1962 at the age of 44 in Rogers, Arkansas…  The company went public in 1970, and the proceeds financed a steady expansion of the business… Sam Walton died in 1992.”

On Forbes 1987 original list of International Billionaires, behind many Japanese and others was first in America – Sam Moore Walton with $ 8.5 billion (4 x that of Warren Buffett).  On Fortune’s 1988 Billionaires list, Sam M. Walton (age 70) and family was number six (6) with $ 7.4 billion.  The Walton’s, not to be confused with The Waltons (award winning TV Series 1971 – 1981), divided up the money after Sam’s death and as separate individuals dropped on the list.  Forbes World’s Billionaires, in the 30th anniversary 2017 list of 2,043 billionaires ($ 7.7 trillion), has Bill Gates (Mircosoft) at number one, followed by Warren Buffett; yet it also reveals that if you add up numbers 15, 16, 17, 116, 288 [the Walton children: Samuel, Jim and Alice; Lukas (only child of John Walton and Christy), and Christy] you get $118.6 billion which would surpass Microsoft’s Gates (86b) + Ballmer (30b) or Google’s Page + Brin; and all others.  In 2006, five Walton’s (Christy – widow of John, whose assets were incorrectly reported by Forbes; Jim, Samuel, Alice and Helen) were on the list with about 15.8 billion each ($ 79 billion); but in 2007 Sam’s wife, and by 2016 Forbes got Christy and Lukas’ assets all sorted out. 1990:  Wal-Mart became the number one retailer in the United States with about $26 billion in annual sales.  They brought out some competition as was their practice; and sold McLane Co. to Warren Buffett’s Berkshire Hathaway later in 2003.

1994:  The National Advertising Review Board caused Walmart to change from “Always the low price. Always;” to “Always Low Prices…”

1995: Walmart was in all 50 states and had 1,995 Walmart stores, 239 Supercenters, 433 Sam’s Clubs and 276 international stores which totaled $93.6 billion in sales and employed about 675,000 people.  An Iowa State University study reveals that 5 years after a Walmart opens, nearby ‘small-town’ stores undergo about a 25% decline in sales; and that “smaller towns suffer the brunt of the discount mass merchandisers.”

1999: Walmart had about 1.14 million employees and became the largest private employer in the world.  The United Food and Commercial Workers International Union try the organize Wal-Mart’s workers, but lost the opportunity after Walmart sued them.  The case was overturned by the Arkansas Supreme Court in 2002.

2000: A case filed in Indiana charged that Wal-Mart did not pay workers for overtime and off-the-clock wages they had earned.  In April 2003, the case became the first such suit to be designated as class action.  Workers testified to the method Walmart used; in that the Employee would clock out, and then have to report to the Manager that they were leaving; then the manager would tell them their station or job was not in order or complete and needed to be done before they left.  Employees would often work ten to twenty (20) extra minutes, some an extra hour per week and some 30 or 40 extra hours a year – thus Walmart getting a free week from them x 10,000s+ employees.

2000-2009: The National Labor Relations Board (NLRB) found numerous cases where Wal-Mart violated labor laws between their employees and unions.  The penalties total about $36 million in fines, which amount Wal-Mart makes in about an hour.

2001:  A class-action sued against Walmart alleging discrimination against women was squashed by the Supreme Court was found in part ‘the class is so numerous that joinder of all members is impracticable (Fed. Rule of Civil Procedure 23).”  The case took 10 years to get to the Supreme Court – see 2011.

2002 – A federal jury found that Wal-Mart forced Oregon employees to work unpaid overtime between 1994 and 1999.  Scores of more such lawsuits to come to trial in the United States in Colorado, Texas and numerous states and countries as thousands of employees claimed managers got them to work off the clock by asking them to clean up the store after they had clocked out and by deleting hours from time records.

2004 – On July 6, Wal-Mart’s lawyers appealed a ruling that granted class action status to a sex-discrimination lawsuit against the retailer that was filed in 2001. The class could include up to 1.6 million current and former female employees of the retailer — making it the largest private civil rights case in U.S. history.

2005: An email from an executive at Wal-Mart de Mexico revealed that officials in every Mexican state that had a Walmart received bribes totaling over $24 million.  The New York Times on April 22, 2012 at NYTimes.com ran the article, “Wal-Mart Abroad: How a retail giant fueled growth with bribes, Vast Mexico Bribery Case Hushed Up by Wal-Mart…”

2007: The Environmental Investigation Agency reported that China produced 84% of Walmart’s wood products and that a significant portion came from illegal logging.

2010: Bharti Walmart, a joint venture, opened its first store in India.  Walmart committed $2 billion through the end of 2015 to help end hunger in the United States.

2010:  Wal-Mart paid $27.6 million in fines for illegally dumping hazardous (pesticides, chemicals, paint, acid, aerosols, fertilizer and motor oil) waste in 42 California counties. The settlement included $20 million for prosecutors in 20 jurisdictions and 32 environmental health agencies throughout the state; $1.6 million in costs for the investigation; $3 million to a fund for other environmental investigations; and $3 million toward keeping stores in compliance.

2011: Walmart acquired MassMart of South Africa; and reached 10,000 retail units around the world.

2011:  Walmart and Merrill Lynch agree to pay $13.5 million in a settlement to nearly 2 million Walmart workers for ‘breach of fiduciary duty.’  The long time coming class-action settlement originally filed in 2008 – made happy some lawyers who split about $4 million of the 13.5; and Merrill Lynch got ‘fees’ and kickbacks; but the average worker got less than $10 value and Zero up front – they get reduced future fees in their 401(k), except for the plaintiff puppet J. Braden who got $20,000 so his lawyers could get justice – just-rich.

November 2012: In the first worker’s strike in Walmart’s 50-year history, Wal-Mart workers threatened to walk of the job on Black Friday due to low wages and treatment. April-June 2013: April the Rana Plaza building in Bangladesh collapse due to bad construction and lack of safety concerns.  It was a location which also used child laborers to produce product sold by Walmart.  Then in May the Tung Hai Sweater factory in Bangladesh caught on fire without a proper sprinkler system and sources as a CBSNews.com reported that “the fire engulfed the lower floors of the 11-story factory, which had closed for the day.  The smoldering acrylic products produced immense amounts of smoke and poison gas and the victims suffocated as they ran down the stairs.”  The report continue to say, “the death toll from the garment factory that collapsed …near the Bangladeshi capital soared past 1,000… with no end in sight to the stream of bodies being pulled from the wreckage of the worst-ever garment industry disaster…”  In June, inspections reveal that the new factory building did not have safety systems in place. 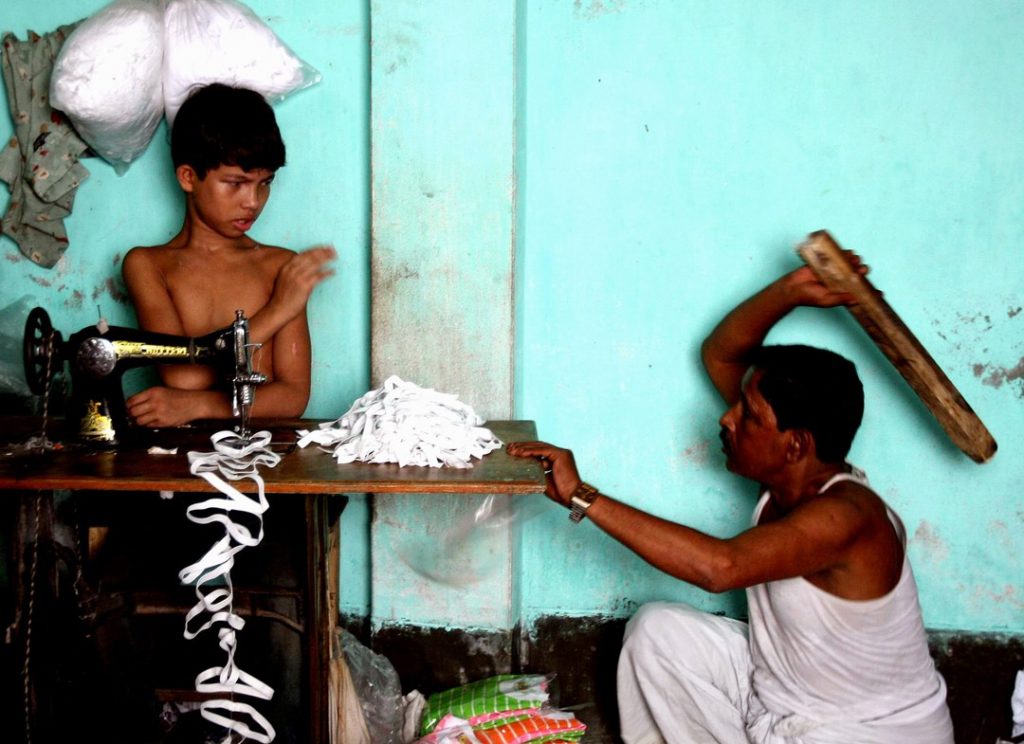 November 2013: According to the National Labor Relations Board, its Office of General Counsel “investigated charges alleging that Walmart violated the rights of its employees as a result of activities surrounding employee protests.   The Office of the General Counsel …found merit in some of the charges…  Walmart unlawfully threatened employees with reprisal if they engaged in strikes and protests on November 22, 2012…”

2014: Walmart acquired a stake in Green Dot Bank, which according to its website has “facilities throughout the United States and Shanghai, China.  Green Dot issues prepaid debit cards for a fee.   GoBank will offer checking accounts with a MONTHLY SERVICE COST of $8.95’ for balances under $500.   By 2014, Walmart employed over 2.2 million ‘associates worldwide;’ and had more than 200 million customers a week in its 11,000+ stores in 27 countries.

2015:   Walmart pledged to hire 100,000 American veterans over a 5 year period; as well as invest over $2.5 billion over 2 years in the U.S. workforce and raise its minimum wage to $9 an hour.  It also committed to buying American, purchasing over $20 billion a year over the next 10 years – we will see.  Rob Walton retired as Chairman of the Board of Directors.

2016: Walmart’s 2016 Annual Report revealed that Walmart had the 3rd most-visited U.S. retail website and that its global e-commerce sales increased 107% over the past 4 years.  It also showed it has 2.3 million associates worldwide at more than 11,500 retail locations; made $482 billion in Total Revenue and had 16 websites in 11 countries.  It listed Jim Walton as Chairman of the BOD and CEO of Arvest Bank Group in southcentral U.S.  and Rob retired but still on 3 committees.  In the last 5 years it returned $55 billion to shareholders but is still involved in lawsuits for not paying its workers for hours worked.  And its workers are still among the lowest paid in the retail industry or food industry.  Yet it listed its ‘Gross profit margin’ at 24.6% and Return on Investment of 15.5% (16.9% in 2015).  It is in 28 countries and is the largest corporation in the world with $ 199.6 billion in assets and $90 billion in Retained earnings.  In the past Walmart did 11 stock splits to drive shares and share prices up; but now it is in the process of buying back $17.5 billion in ‘share repurchases;’ of which the Walton family owns about 50%, and it is to be put is trust to give away about 6% of their outstanding shares, following the Gates Foundation and Warren Buffett’s pledge.  Time will tell. https://s2.q4cdn.com/056532643/files/doc_financials/2016/annual/2016-Annual-Report-PDF.pdf 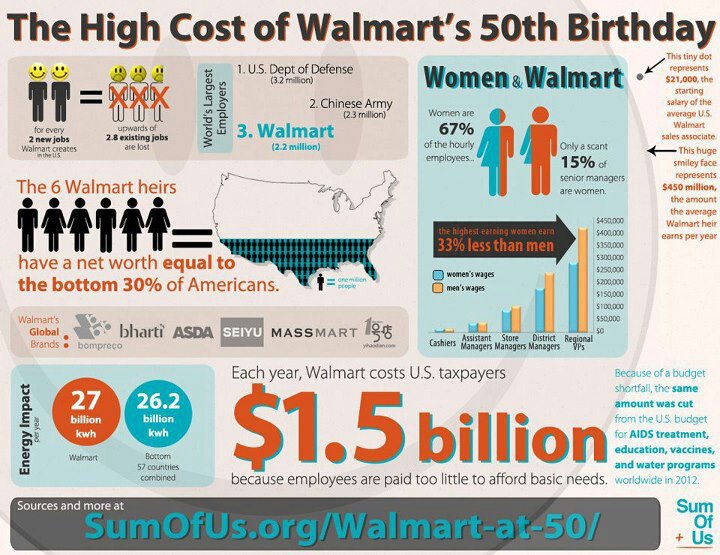