The United States and the Russian Federation continue to lead the world in nuclear weapons. In 1942 during World War II, the United States set up the Manhattan Project to develop atomic weapons.  On July 16, 1945, America tested the world’s first atomic bomb (nuclear weapon), code-named ‘Trinity,’ which was dropped from a bomber.  A landmark in New Mexico marks the site where the bomb was exploded having a power of 20,000 tons of TNT.  (Trinity test bomb below) 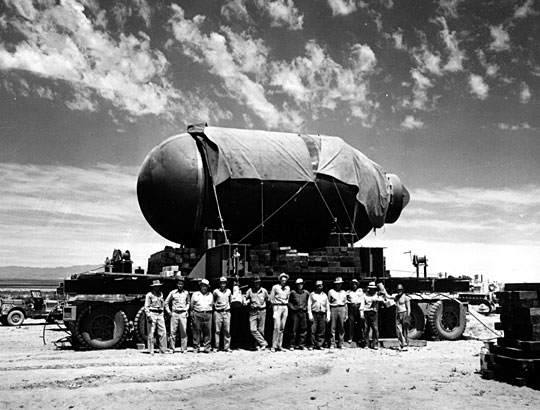 About three weeks later on August 6, 1945 the United States detonated a uranium bomb (‘Fat Man’) over Hiroshima killing tens of thousands instantly and a total of more than 140,000 people within a few months.  Japan did not immediately surrender and on August 9, a plutonium bomb was detonated over Nagasaki killing about 70,000 people instantly.  Though Japan surrendered formally September 2 and World War II was over; and though the United Nations General Assembly called for the complete elimination of nuclear weapons January 1946, America entered a Nuclear Arms race with their ‘Ally’ Russia.

Nagasaki victims; thousands simply melted (note Zechariah 14:12 what will come in the future; ‘strike all the nations that fought against Jerusalem; their flesh will rot while they are still standing, their eyes will melt in their sockets…’) 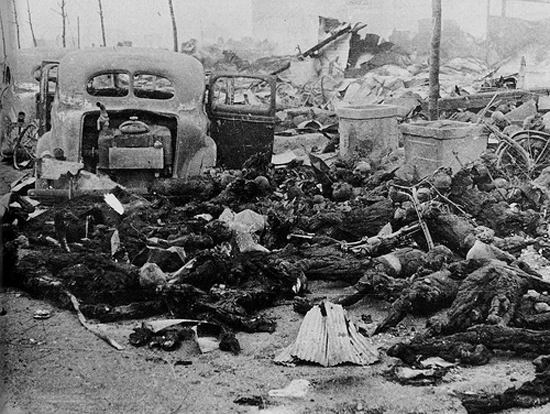 August 29, 1949, in Kazakhstan, the Soviet Union tested its first nuclear weapon; code-name ‘First Lightning.’   The United Kingdom followed in 1952, testing at Montebello Islands, Australia.  Less than a month later, America tested the first H-bomb.  The hydrogen bomb was detonated in the Marshall Islands, and was about 500 times more powerful than the Nagasaki bomb. 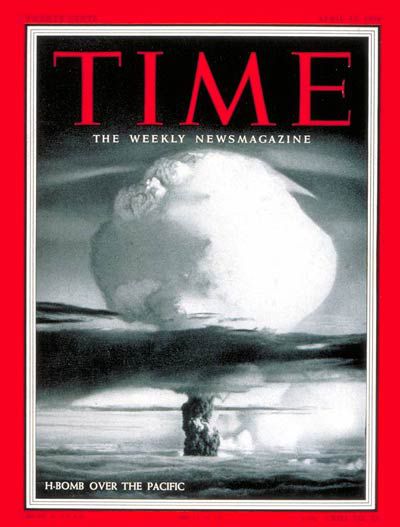 In March 1954, the United States tested a 17-megaton hydrogen bomb (Bravo) at Bikini Atoll in the Pacific Ocean. A year later Albert Einstein was joined with other scientist issuing a Manifesto warning of the dangers of nuclear war; and in February 1958 the Campaign for Nuclear Disarmament held its first meeting in the UK. 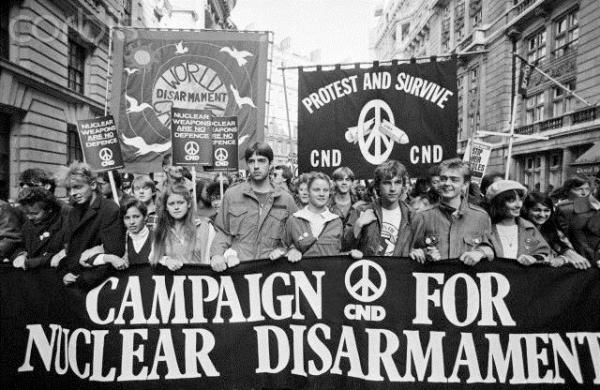 In February of 1960, France tested its first atomic bomb in the Sahara desert.  It was said to measure about 65 kilotons of TNT.  Not to be outdone, October 1961, the Soviet Union exploded the most powerful bomb ever detonated.  The Hydrogen ‘Tsar Bomba’ was tested in northern Russia. 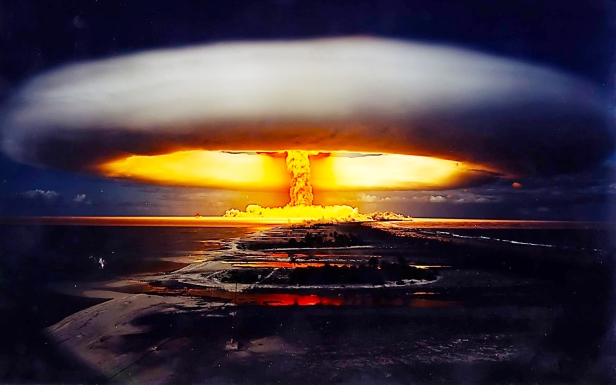 October 1964 China exploded its first H bomb in Sinklang Province.  July 1, 1968 the Treaty on the Non-Proliferation of Nuclear Weapons (NPT) was signed and went in force in 1970.  In May 1995 the Treaty was extended indefinitely and 190 countries have joined the Treaty.  The Treaty was ‘done in triplicate’ and in English, Russian, French, Spanish and Chinese.  The NPT states in part, “considering the devastation that would be visited upon all mankind by a nuclear war and the consequent need to make every effort to avert the danger of such a war and to take measures to safeguard the security of peoples, believing that the proliferation of nuclear weapons would seriously enhance the danger of nuclear war, in conformity with resolutions of the United Nations… and desiring to further the easing of international tension and the strengthening of trust between States… (for) the liquidation of …stockpiles, and the elimination from national arsenals of nuclear weapons… we agreed… (to the following articles)…”

In 1974, India conducted its first nuclear test.  In 1985, the South Pacific Nuclear Free Zone Treaty was signed.  In 1986 it was discovered that Israel had nuclear weapons – as many as 200.   In 1995 and 1996 Southeast Asia, the Ukraine and 43 African nations established nuclear-weapon-free zones.   That same 1996, the International Court of Justice declared with little power that nuclear weapons are illegal; and the Comprehensive Nuclear Test Ban Treaty was passed by the United Nations. In 1998, Pakistan tested nuclear weapons.  And in 2006, North Korea conducted a nuclear test.

In 2007, the International Campaign to Abolish Nuclear Weapons (ICAN) was founded in Australia.  Several international conferences followed in Norway, Mexico, Austria and other countries.  ICAN in now organized in 95 countries and the UN still seeks to control nuclear weapons and monitor the NPT through its UN office for Disarmament Affairs.

The number of nuclear weapons in the world has declined significantly since the Cold War: down from a peak of approximately 70,300 in 1986 to an estimated 15,350 in early-2016. Government officials often portray that accomplishment as a result of current arms control agreements, but the overwhelming portion of the reduction happened in the 1990s. 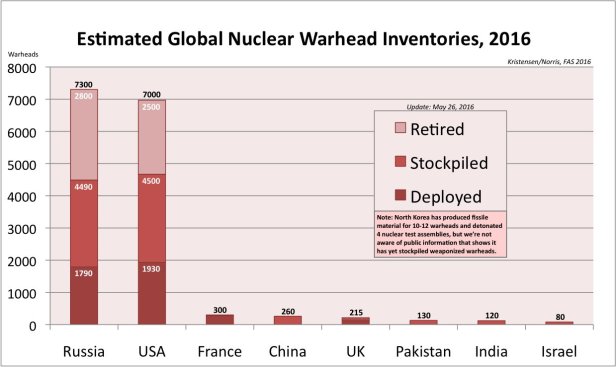 According to the Congressional Research Service report U. S. Strategic Nuclear Forces: Background, Developments and Issues (9/27/2016), which is available to the public and our potential enemies: