CNN reported in an October 2016 article, STD rates reach record high in United States, that “there were more reported cases of sexually transmitted diseases last year than ever before in the United States, according to the latest STD surveillance report by the Centers for Disease Control and Prevention.”

According to the CDC 2015 Fact Sheet, Reported STDs in the United States, “Many cases of chlamydia, gonorrhea, and syphilis continue to go undiagnosed and unreported, and data on several additional STDs — such as human papillomavirus, herpes simplex virus, and trichomoniasis — are not routinely reported to CDC. As a result, the annual surveillance report captures only a fraction of the true burden of STDs in America…  STDs are a substantial health challenge facing the United States.  CDC estimates that nearly 20 million new sexually transmitted infections occur every year in this country, half among young people aged 15-24, and account for almost $16 billion in health care costs…”

The CDC says, “Herpes is a common sexually transmitted disease (STD) that any sexually active person can get. Most people with the virus don’t have symptoms. It is important to know that even without signs of the disease, it can still spread to sexual partners… about 1 out of every 6 people aged 14 to 49 years have genital herpes… to avoid STDs… a long-term mutually monogamous relationship… with a partner… negative of STDs…’

‘Genital herpes sores usually appear as one or more blisters on or around the genitals, rectum or mouth. The blisters break and leave painful sores that may take weeks to heal. These symptoms are sometimes called “having an outbreak.” The first time someone has an outbreak they may also have flu-like symptoms such as fever, body aches, or swollen glands.  Repeat outbreaks of genital herpes are common, especially during the first year after infection. Repeat outbreaks are usually shorter and less severe than the first outbreak. Although the infection can stay in the body for the rest of your life, the number of outbreaks tends to decrease over a period of years.” 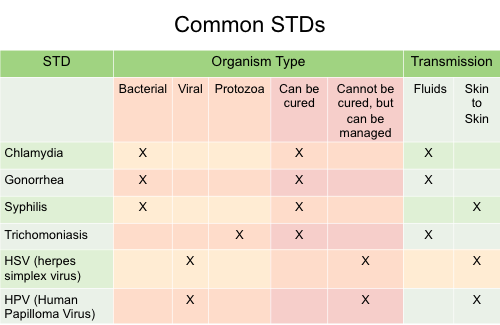 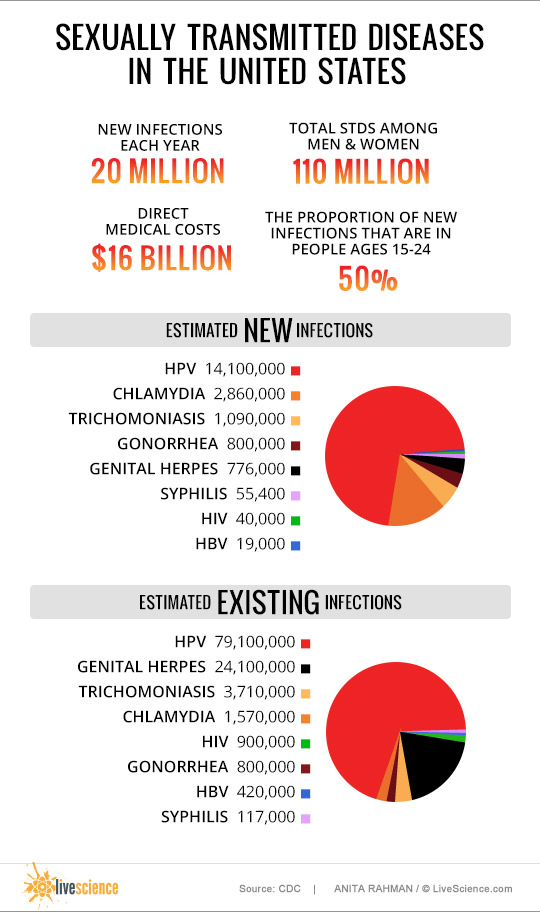 According to an Vitals.NBCNews.com 2013 report, Straight married couples healthier than gay couples, researchers found ‘gay and lesbian couples living together report poorer health than straight married couples… odds of reporting poor or fair health was 61% higher for same-sex cohabiting men… and 46% higher for same-sex cohabiting women than in heterosexual marriages.’ 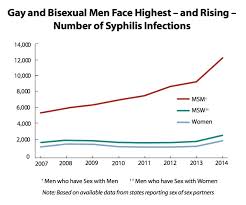 According to the National Institute on Drug Abuse (NIDA), 2016, “Abuse of tobacco, alcohol, and illicit drugs is costly to our Nation, exacting more than $700 billion annually in costs related to crime, lost work productivity and health care.”

The NIH and NIDA reports that “tobacco use is the leading preventable cause of disease, disability and death in the United States.  According to the CDC, cigarette smoking results in more than 480,000 premature deaths in the United States each year – about 1 in every 5 U.S. deaths… and secondhand smoke can cause serious diseases and death; each year, an estimated 88 million nonsmoking Americans are regularly exposed to secondhand smoke and almost 41,000 nonsmokers die for diseases caused by secondhand smoke exposure.”

“Nicotine is readily absorbed into the bloodstream when a tobacco product is chewed, inhaled, or smoked… Upon entering the bloodstream, nicotine immediately stimulates the adrenal glands to release the hormone epinephrine (adrenaline). Epinephrine stimulates the central nervous system and increases blood pressure, respiration, and heart rate.  …Similar to other addictive drugs like cocaine and heroin, nicotine increases levels of the neurotransmitter dopamine, which affects the brain pathways that control reward and pleasure. For many tobacco users, long-term brain changes induced by continued nicotine exposure result in addiction—a condition of compulsive drug seeking and use, even in the face of negative consequences.  …Cigarette smoking accounts for about one-third of all cancers, including 90 percent of lung cancer cases. In addition to cancer, smoking causes lung diseases such as chronic bronchitis and emphysema, and increases the risk of heart disease, including stroke, heart attack, vascular disease, and aneurysm. Smoking has also been linked to leukemia, cataracts, and pneumonia.  On average, adults who smoke die 10 years earlier than nonsmokers.”  NIDA ‘DrugFacts’ May 2016

According to NIDA 2016 ‘DrugFacts,’ “Cocaine increases levels of the natural chemical messenger dopamine in brain circuits controlling pleasure and movement…  Cocaine prevents dopamine from recycling, causing excessive amounts to build up between nerve cells. This flood of dopamine ultimately disrupts normal brain communication and causes cocaine’s high.  Large amounts of cocaine can lead to bizarre, unpredictable, and violent behavior.  Cocaine’s effects appear almost immediately and disappear within a few minutes to an hour.

Some long-term health effects of cocaine depend on the method of use and include the following:

Other long-term effects of cocaine use include being malnourished, because cocaine decreases appetite, and movement disorders, including Parkinson’s disease.” 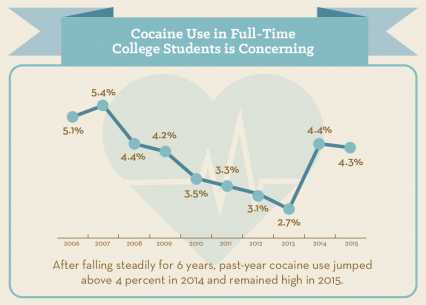 According to the NIDA, “Daily marijuana use has steadily increased among college students in the past two decades with 3.7 percent smoking marijuana daily in 1995, 4.0 percent in 2005, and 4.6 percent in 2015.”

According to Narconon.org, “Marijuana use and addiction are most pronounced in America’s young people. Of those going to rehabilitation for Weed Addiction, 45 percent are under 21 years of age.

Dangers in the immediate effects of marijuana include distortions of time and space perceptions and impaired coordination, all of which may be contributing to the increased risk of traffic accidents recently discovered.

Particularly important for students to know about is the creation of difficulty thinking or problem solving and impairment of memory and learning. These difficulties can last for as long as four weeks after drug use…  Heavy abusers of marijuana were found to suffer damage to social life, work or career status and cognitive ability. Schoolwork and the achievement of goals were also found to suffer.” 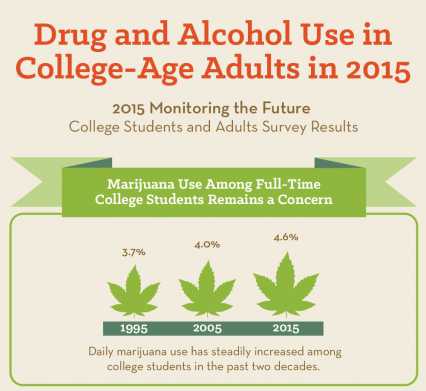 According to the 2014 National Survey on Drug Use and Health (NSDUH), 10 million people aged 12 or older reported driving under the influence of illicit drugs during the year prior to being surveyed.  A 2010 nationwide study of deadly crashes found that about 47 percent of drivers who tested positive for drugs had used a prescription drug, compared to 37 percent of those had used marijuana and about 10 percent of those who had used cocaine. The most common prescription drugs found were pain relievers.

One NHTSA study found that in 2009, 18 percent of drivers killed in a crash tested positive for at least one drug.† 9 A 2010 study showed that 11 percent of deadly crashes involved a drugged driver.  A 2011 survey of middle and high school students showed that, in the 2 weeks before the survey, 12 percent of high school seniors had driven after using marijuana, compared to around 9 percent who had driven after drinking alcohol.  A study of college students with access to a car found that 1 in 6 had driven under the influence of a drug other than alcohol at least once in the past year. Marijuana was the most common drug used, followed by cocaine and prescription pain relievers.13

For more information about marijuana and prescription drug misuse, visit: