THE ORIGINAL PURPOSE: To ensure constitutional protection of freedmen.  It was concerned with ‘citizenship,’ its definition and rights, with the political rights of voting and with property rights, all of which were subject to the will and laws of the individual states.  It was in NO WAY concerned with touching the FREE EXERCISE of RELIGION.

This amendment came after the 1833 Slavery Abolition Act by Britain, the July 1852 Fredrick Douglas speech (‘What to the Slave is the Fourth of July’), and the March 1857 Dred Scott Supreme Court case that declared that no African Americans could legally be a U.S. citizen.  January 1, 1863, during the Civil War, President Lincoln issued the Emancipation Proclamation; and on December 13, 1865, after the end of the Civil War, Congress formed the Joint Committee on Reconstruction.

On December 18, 1865, the 13th Amendment was adopted, which made slavery illegal.  About that time the 15 members of the Joint Committee on Reconstruction began to discuss what would become the 14th amendment.  April 9, 1866 the Civil Rights Act was passed over President Andrew Johnson’s veto (he would be later impeached).   June 13, 1866, Congress passed the 14th Amendment, about 14 months after the April 9, 1865 surrender at Appomattox that ended the Civil War between the States.

The 14th amendment was first ratified by Connecticut June 25, 1866, by Tennessee that July 7 (first former Confederate State), then rejected by Delaware, February 7, 1867; and ratified next by Louisiana and South Carolina, July 9, 1868 and became part of the Constitution July 28, 1868, though it was not until March 1898 that the Supreme Court (Wong Kim Ark) ruled that everyone ‘born in the United States’ is a ‘citizen.’  And not until Brown v. Bd. of Education, May 17, 1954, that the Court overturned Plessy v. Ferguson (1896) and said that segregated schools violated the 14th Amendment; and not until Loving v. Virginia (1967) that state laws against interracial marriage were found unconstitutional; and it was not until 1976 that Kentucky and 2003 that Ohio ratified the 14th Amendment.

Mr. Doolittle.  I presume the honorable Senator from Michigan does not intend by this amendment to include the Indians… I move… inserting… ‘excluding Indians not taxed.’

Mr.  Cowan. ‘…citizenship of the United States.’ What does it mean? What is it length…?  Is the child of the Chinese immigrant in California a citizen? Is the child of a Gypsy born in Pennsylvania a citizen? If so, what rights have they? Have they any more rights than a sojourner in the United States?  If a traveler comes here from Ethiopia, from Australia, or from Great Britain, he is entitled to a certain extent, to the protection of the laws.  You cannot murder him with impunity… He has a right to the protection of the laws; but he is not a citizen… the mere fact that a man is born in the country has not heretofore entitled him to the right to exercise political power.  He is not entitled… to be an elector… chosen by the people…

So far as the courts and the administration of the laws are concerned, I have supposed that every human being within their jurisdiction was in one sense of the word a ‘citizen,’ that is, a person entitled to protection; but in so far as the right to hold property… real estate… that was a subject entirely within the control of the States…”

Debates on the 14th Amendment by Congress centered entirely on the rights of citizens and freeman – especially the new freed black men and Asian workers and immigrants (as Senator Cowan said: “…the yellow race; the Mongol race.  They outnumber us largely… they may pour in their millions upon our Pacific Coast in a very short time.  Are the states to lose control over this immigration?  Is the United States to determine that they are to be citizens?” – 1866 Senate debates) – AND in no way on changing the First Amendment Free Exercise of Religion rights.

OR CONSIDER in the 400 pages of Congressional Debates on the 14th Amendment, which came under post-Civil War “Reconstruction,” and lasted for months, which were centered on “the civil rights” of “freedmen” relating to repealing “test oaths” and things that restricted the rights of voting and holding property and even the free exercise of religion and establishing churches by the newly freed black slaves.

These debates NEVER discuss limiting the Free Exercise of Religion.

1776 Letter to Pres. John Hancock (referred to Jefferson, Franklin, Adams) from col. James Wilson: They assure “the Hessians (mercenaries)” that if they “quit that iniquitous service” for the British, as “foreigners who shall leave the armies of his Britannic majesty” would receive 50 acres of land and a guarantee of protection in the “Free Exercise of their Religion and civil liberties.”  And hundred years later these religious protections (and primarily to the CHRISTIAN religion) were more so ‘guaranteed’ to all “citizens of the United States.” 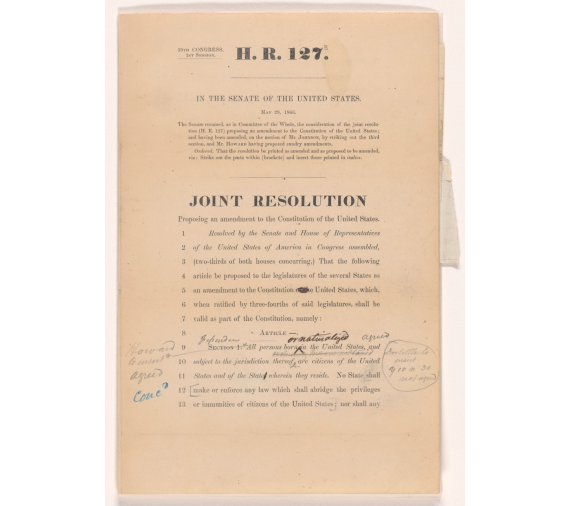