According to the National Center for Education Statistics (NCES), “based on data from the Current Population Survey, the status dropout rate decreased from 12.1 percent in 1990 to 6.5 percent in 2014, with most of the decline occurring after 2000 (when it was 10.9 percent). However, there was no measurable difference between the 2013 rate and the 2014 rate.’

In a 2015 article by The Atlantic, ‘The Future of Morality, at Every Internet User’s Fingertips,’ the article discusses why ‘platforms are deemed morally responsible for the consequences, even unintentional, of the spaces they create online.’  It addressed Facebook, Reddit and other host sites and ‘platform ethics.’

2016: The FBI released its annual Uniform Crime Reporting (UCR) Program, Crime in the United States, 2015.  It revealed almost a 4% increase in violent crime from 2014.

Nonwhites commit 90% of the violent crimes in the nation.

In 2014, there were an estimated 1,165,383 violent crimes (murder and non-negligent homicides, rapes, robberies, and aggravated assaults); for the category of “violent crimes” there were a total of 8,730,665 arrests.

About 1 in 30 Americans commit felony crimes.

The Bureau of Justice Statistics, part of the Justice Department, said in a December 2014 report that in 2013, 2.2 million people were incarcerated and more than 4.7 million people were under community supervision (on probation or parole). The report further says those counts (which roll in some people not convicted of crimes) equate to 2,830 people per 100,000 U.S. adults, meaning 2.8 percent of U.S. adults were under correctional supervision.

According to NAP.edu, (2014) The Growth of Incarceration in the United States, “After decades of stability from the 1920s to the early 1970s, the rate of imprisonment in the United States more than quadrupled during the last four decades. The U.S. penal population of 2.2 million adults is by far the largest in the world.  Just under one-quarter of the world’s prisoners are held in American prisons. The U.S. rate of incarceration, with nearly 1 out of every 100 adults in prison or jail, is 5 to 10 times higher than the rates in Western Europe and other democracies. The U.S. prison population is largely drawn from the most disadvantaged part of the nation’s population: mostly men under age 40, disproportionately minority, and poorly educated.”

According to the NAACP, ‘1 in 6 black men had been incarcerated as of 2001.’  They say if trends continue, as many as 1 in 3 could be in prison at some point of the lifetime. 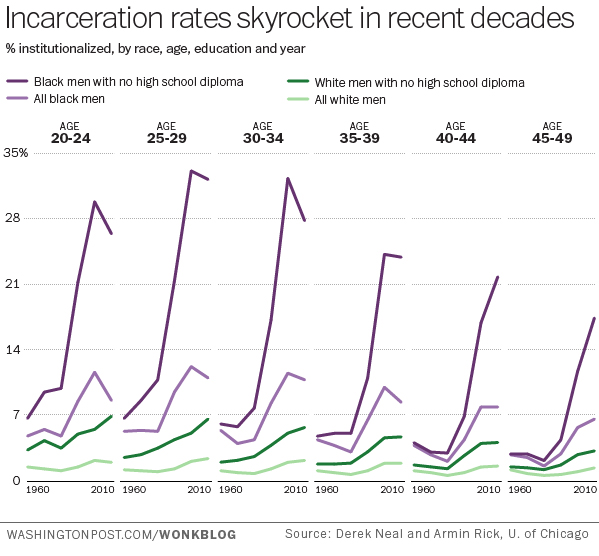 Below: Percent of Blacks Incarcerated in 2012.

By 2010, nearly a third of black, male high school dropouts aged 25-29 were imprisoned or otherwise institutionalized. This is higher than the employment rate for the same group, which was less than 25 percent. 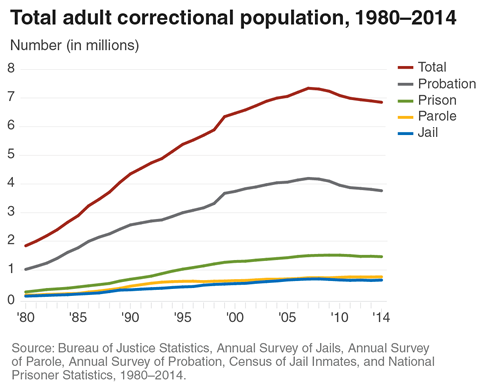 Although not all mental illnesses is directly related to morality of a nation, a vast amount of depression cases sheds light on the state of a nation.  In 2014, there were an estimated 43.6 million adults aged 18 or older in the United States with AMI in the past year. This number represented 18.1% of all U.S. adults.

In 2014, there were almost 10 million adults in the U.S. with a Serious Mental Illness (SMI).  Thus, over 4% of all U.S. adults have at least one serious mental illness.  Additionally, about 1 in 5 children currently or at some point in their life will have had a seriously debilitating mental disorder.

About 73% of homeless adults with serious or severe mental illnesses; likewise, about 70% of youth in the juvenile justice systems have at least one mental health condition. 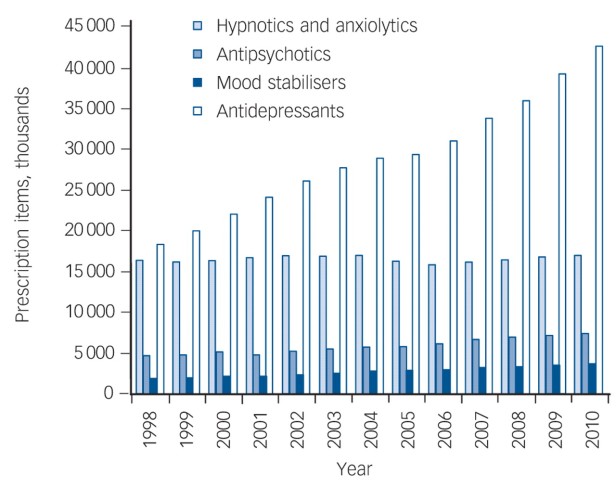 The U.S. Depart. Of Health and Human Services (CDC National Center for Health Statistics) 2015 report, showed while number of deaths per 100,000 population for ‘all causes’ fell from 2000 to 2014; especially for heart disease, stokes and cancer, the rate of suicides has increased in America.

According to Save.org, 15% of people who are clinically depressed die by suicide.

For information and Help see: https://thetruthsource.org/overcoming-suicide-and-severe-depression/